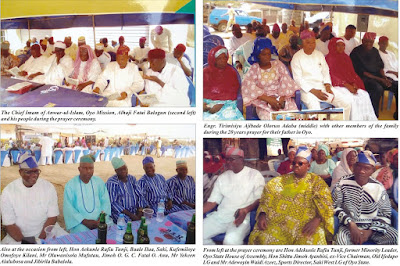 The ceremony was organized by the deceased's family among who is Engr. Tiri Ajibade.

The prayer was conducted by the Chief Imam of Anwaru-ul-Islam Movement of Nigeria, Oyo Mission, Alhaji Abdul-Fatai Balogun Janta, supported by other leaders in Anwaru-ul-Islam.

The family holds the special prayer annually in remembrance of the deceased, in appreciation of his love, care and his leadership qualities while alive.

He was described as an amiable father, a pious Muslim who feared Allah greatly.

One of his  children, Engr. Tiri Ajibade has always arranged the prayer ceremony in his honour every year in conjuction with all other children.

Engr. Ajibade usually gathers all the elders and top Islamic leaders together on New Year day for great feast to mark the day his father departed this world.

In his sermon, the Chief Imam of Anwaru-ul-Islam, Oyo, Alhaji Abdul Fatai Balogun Janta, commended the children of Alhaji Ajibade Olorun Adaba for given their father due honour and respect yearly, telling them that Quran supports such ceremony and prayers for the repose of a deceased's soul.

Imam Balogun told the guests that the deceased had instructed his children before he died that he should be buried right infront of his house so as to be seen always by everybody. This is why the family is doing this to remember him.  He prayed for all the children that their own children would not forget them too when they pass away since they do not forget their father.

Imam Balogun asked each of the children to request for one thing from Allah, and the request would be granted before the next remembrance ceremony, pleading with them to remember to give testimony after.

He said with the prayer ceremony, Allah would surely forgive the sin of the deceased as well as Imam Baba Elewi and Alhaji Alakitan.  Imam Elewi was the former Anwaru-ul-Islam Chief Imam.

He prayed specially for all the deceased's children that Allah would continue to bless them in life.

The Chief Imam, in his sermon, pleaded with Nigerians to fear Allah, saying the rate at which blood of innocent people is being shed was too much.  He said for Allah to forgive us as a nation, we must stop ritual killings, kidnapping and other heinous crimes.

He appealed to Nigerians to always have the fear of Allah at heart all the time as we go into the new year.

The Imam also prayed for the extended family of the deceased at Agbajuwon in Oyo East LG. He equally prayed for progress and  unity among the Anwarul-ul-Islam Mission in Oyo and Nigeria at large.

Speaking about the role played by the deceased in the Awarul-ul-Islam while alive, the Imam said Alhaji Ajibade was instrumental to the establishment of a mission school in 1992.  The deceased and both Alhaji Rafiu Akinola and Alhaji Ibraheem Ayerina built a block of classrooms each for the Anwarul-ul-Islam Mission School in Oyo.

The Imam said Alhaji Ajibade passed on while preparation was being made to establish a secondary school for the mission.  The Chief Imam announced at the ceremony that the mission would mark 25th anniversary of the mission in August 2018, urging the children and family of Alhaji Ajibade to do something to immortalize the name of their father during the anniversary.

While giving vote of thanks on behalf of the entire family, Engr. Tiri Ajibade, thanked Allah for His provision and protection over all the children in the last 20 years since their father passed away.  He appreciated the role Anwarul-ul-Islam played in ensuring the success of the prayer ceremony.

He said the family had been fully identified with Anwarul-ul-Islam and that they would never live the mission. We appreciate the love among members especially the women group.

“I must say that I always entertain fear on how to maintain the standard set by my father in Anwarul-ul-Islam.” Papa had done a lot within the fold. He thanked all his guests from Ibadan, Oyo and Saki, my station for their support, prayer and love. I also thanked all members of the family for their support both in cash and in kind.