This assurance was contained in the address presented by the state Commissioner for Culture and Tourism, Alhaja Iyabo Jolaade Adewuyi at the occasion of Shao Awon Mass Wedding Cultural Festival 2017 held recently in Shao, in Moro Local Government Area of the state.

The commissioner described the annual festival as a unique cultural tourism festival where all  the marriageable girls in the ancient community are given out in marriage in a colourful ceremony. According to her, the celebration is equally accompanied with a host of other side attractions which make the entire community wear a glow mood. 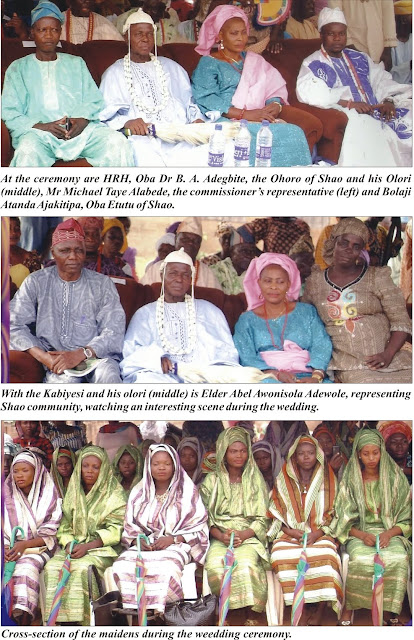 The festival attracts thousands of spectators yearly from all parts of the country and there is no doubt the memory and multiplier effect of such ceremonies would remain within the community and neighbouring cities for a long time.

The importance of this festival, according to her, cannot be over-emphasized.  It has publicized Shao community nationally and internationally. The festival enhances unity and understanding among the indigenes and it has brought re-union among the old friends and relations especially during its celebration. Thus the state government will continue to promote the festival until it attains the UNESCO standard, she added.

The commissioner therefore used the opportunity to congratulate the young beautiful maidens, the celebrants and wish them all blissful and fruitful marriage.

In the address delivered on her behalf by Mr. Michael Taye Alabede, the General Manager, Kwara State Hospitality and Tourism Development Board, the commissioner appreciated the state executive Governor Alhaji (Dr.) Abdulfatah Ahmed for the unequal support being given from time to time to tourism/cultural programmes within the state and for placing the state in the forefront as the heart of tourism in Nigeria. She also appreciated various sponsors for making this year's celebration worthable.

Alhaja Adewuyi congratulated His Royal Highness, Oba (Dr.) Bamidele Adegbite, the Chief Custodian of Awon Mass Wedding Festival, the entire Ile Alawon and all other custodians of the unique festival for their efforts at sustaining the age-long festival.

In his speech at the occasion, the Ohoro of Shao, HRH Oba Alhaji (Dr.) B.A. Adegbite, expressed delight for the grace to witness the festival again.  He warmly welcomed, on behalf of all members of the Ohoro-in-Council and the entire members of Shao community to the occasion.

In the address, Kabiyesi said: For those of you who have never witnessed this event before, I want to inform you that Awon Mass Wedding Festival  has been an age-long event which was handed down to us by our founding fathers.  It is an annual event when all our maidens who are ripe for marriage are given out to their husbands.  The annual event is unique because this is the only community where such marriage takes place in a day.  The festival is also an event, which brings together sons and daughters of Shao once in a year.  Those who are far and near would find time to come home to celebrate the festival.

Their friends and well  wishers also come to know Shao and witness the event.

At this juncture, I wish to use this medium to express our profound gratitude and appreciation to the state government under the able and dynamic leadership of our Governor, Alhaji (Dr.) Abdulfatah Ahmed for the promotion of the Awon Mass Wedding Festival.  We implore the state government to further encourage and help the community, and organizing committee of the festival with enough financial assistance to enable the festival be put into the power level comparable to Gani Festival in Baruten/Kaiama Local Government Area of the state.

I also wish to use this opportunity to express our appreciation to the Special Assistance to the Executive Governor of this state in person of Hon. Abdullateef Femi Adebayo who introduced an innovation to the event this year by bringing one of the foremost Rara musicians, Ajobiewe to add glamour to the event.

In conclusion, I want to say big “Thank you” to you all for your presence at this year's festival. More importantly, I wish to thank His Excellency, The Executive Governor of this state, Alhaji Abdulfatah Ahmed for seeing that this year's festival is a huge success.  I pray Almighty Allah to give divine wisdom, sound health and long life with which to steer the ship of the state to the promised land.

A Celebration of Womanhood:
Equally, Elder Abel Awonsola Adewole, the representative of Shao Community in his address at the occasion, described Awon Mass Wedding Festival as a celebration of Womanhood during which maidens in Shao are given in mass marriage.  In the address, Elder Adewole said: “It is exactly one year ago when a colourful ceremony of this nature took place in the town of Shao. We are here once again to celebrate the annual festival.

Let me on behalf of the entire people of Shao welcome Your Excellency, the Executive Governor of Kwara State, Alhaji Abdulfatah Ahmed, who is ably represented by the state Commissioner for Social Development, Culture and Tourism for finding time to celebrate with us in Shao.  According to him, he said Awon Mass Wedding Festival is an age-long festival that has been with the people of Shao since the community was founded. It is a celebration of womanhood during which maidens in Shao are given in mass marriage.

This year 2017 festival has been packaged to be colourful, eventful and enjoyable.  I therefore want to enjoin our esteemed guests to feel free and enjoy the interesting aspect of the festival, he said.

At this juncture, I would want to thank and appreciate the Kwara State governor for his positive contributions by moving Kwara State forward especially in the area of culture and tourism.

I also want to appreciate all our supporters who have been with us in the last few years and those that are starting with us this year.  They are Ministry of Social Development, Culture and Tourism, Moro Local Goverment Council, the Tourism Board, Kwara State Council for Arts and Culture, the J.O.O.A. Hotels, Shao, RATEM Group of Hotels, Ilorin and indeed the office of the Special Adviser on Culture and Tourism.

Elder Adewole used the occasion to appeal to the Kwara State government to look into the deplorable condition of the network of roads in Shao town. We would also be grateful if the stool of Ohoro of Shao is duelly recognized and graded accordingly.

Guests from various parts of the state and even beyond graced the occasion. Among them was Mr. Joshua Babatope who came from Osun State. He described the festival as unique, urging the state government to continue to support it.  He said he always attend the ceremony every year.  Babatope said the festival was not fetish at all, saying both muslims and christians celebrate it.  It is indeed a pure cultural Festival; he pointed out.

Adebayo Ghemisola from Iboo Compound, Shao expressed gratitude to all the guests at the occasion on behalf of all the maidens.