- January 19, 2018
His Royal Highness, Oba Aliu Bolakale Abdulkadir Oyebola V is the paramount traditional ruler of Falokun Oja, an ancient town in Ifelodun Local Government Area of Kwara state. Oba Abdulkadir spoke with a crew of Heritage Echo Newspaper led by its Publisher ,Chief Opeyemi Salaudeen in an interview in his Palace recently. The chat with Kabiyesi runs thus: 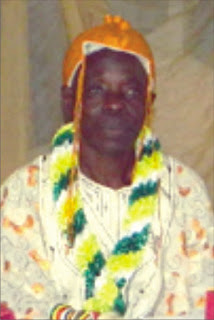 Kabiyesi, can we know a little about your background and tittle?

Let me first of all warmly welcome you to Falokun Oja town and also to my palace. I will say that I am one of the traditional rulers in Kwara State.

As a young child, I attended Local Education Authority (L.E.A) Primary School, Ipee, from 1963 to 1969 for my primary school education.

Then Technical College, Kotangora 1970 to 1975 after which I joined clerical line where I attended Niger State Polytechnic in 1999-2001. I later bagged Diploma in Public  Administration.

I was appointed and installed as Baale in April 1999, I was elevated from Baale to 4th Class position Oba in September 2014 by our able and indefatigable Executive Governor of Kwara State, His Excellency, Alhaji Abdulfatai Ahmed. That is the journey so far.

Kabiyesi, where exactly did the people or may I say your forefathers originate from?

Thank you. My forefathers originated from Oyo-Ile. In  other words, we are direct descendants of Alafin  of Oyo.

The people of Falokun Oja have been in existence since 15th century. This town, Falokun Oja was established by Gbonka.

Let me say that there used to be a famous market in this Falokun Oja about 70 years ago. Buying and selling has stopped in the market long ago now.

In the market then, they used to sell various commodities such as shea butter (Ori), yams, charcoal, yam flour, vegetables and many other items like that. But later, the market became dormant and there was  nothing like buying and selling there for quite a long time now.

The cheering news about the market is that effort is being made to resuscitate it .

We are now looking forward to Ifelodun Local Government Authority to re-open the market.

With this, the council will be generating a lot of revenue to increase it Internally Generated Revenue (IGR).

We are appealing to the newly elected chairman of Ifelodun Local Government, Hon (Alhaji) Abdulfatai Adeniyi Garuba (a.k.a Labaka) to include it among his programme because if the market is back, traders and farmers  from surrounding towns up to Oyo State among others will be coming to trade there. These were the people who used to patronise the market some 70 years ago. Anytime the Local Government is ready to reactivate the market, land will be proide. If the market is re-opened, more people will come even from Ilorin, Lagos and many other parts of the country. There will be space for trailers and other vehicles to park. There won't be congestion in the new market.

Kabiyesi, your vision for the town and what are your achievements since you came on board as the paramount traditional ruler of Falokun Oja land?

My vision and dream for the town is to ensure that Falokun Oja appears on the world map during my reign.

However, to move the town forward socially amd econo,ically, we need the full support of both the Local and State Governments.

We want the State Government to construct the exisiting Jimba-Oja to Falokun-Oja untarred road to connect with Ilorin and Fufu.

Also, there should be a new road to connect the town with University of Ilorin. The bridge over River Oyun should also be completed. Pillars had already been erected for the bridge. If this is put in place vehicles coming from Osogbo, Offa etc can ply the road to Oke-Oyi and the northern part of the country.

On my achievements, when I came on board as the traditional ruler of Falokun Oja, I met just a primary school on ground. It has been there since early 90s. As at present, there are secondary schools both junior and senior.

Connection of our electricity to National Grid also happened during my reign. Peaceful co-existence is also my achievement.

I seize this opportunity to appeal to our governments both Local and State to assist us in renovating all the classes in our primary school which is at dilapidating stage. We also appeal for the sinking of more bore holes.

Also, we need water taps and boreholes about five more in the town in addition to the two we have already.

Another thing is that peace is reigning supreme in my domain. There is light in the town too. All these are happening during my reign.

How many ruling houses do you have in the town Kabiyesi?

If I may say, this is my 18th year on the throne of my forefathers.

Has the town witnessed further development since you came on board?

On the social side, the indigenes are trying. They have contributed to the motorised borehole in the town. They tax themselves to provide it, to supplement the one provided by the government. Everyone in the town is enjoining the water now.

The people have embarked on an ultramodern palace which will be first of it kind in the town. The work is progressing steadily and very soon the work will be completed, definitely before the next ileya festival.

We have  already spent up to 10 million naira on the project up to date and we will still need up to 120 million naira. This is why we are appealing to both state and local governments to assist us with.

I want to appeal to the government too to renovate our only hospital built since 1989 and to help us equip it adequately. We always take serious cases to General Hospital in Idofian. So, we are progressing as expected.

Kabiyesi, how cordial is the relationship between you and your chiefs-in-council?

Really, the relationship between me and my chiefs are very cordial. I'm really enjoining their support, love and cooperation.

I want to use this medium to extend my warm appreciation to all indigenes of Falokun Oja town. Their cooperation with me has been so wonderful. Even those in diaspora are joining us in moving the town forward. Once I call on them for discussion on the progress of our town, they always respond promptly. I want to thank Barr. Abdul Ganiyu Folabi Salahuddeen for the wonderful role he is playing in the development and progress of Falokun Oja.

Is there any cultural festival that brings all indigenes together annually?

Really there is something like that and it's Ileya festival. Ileya festival is the time good number of Falokun Oja indigenes including those in diaspora gather together, we seize the opportunity to brain storm on how to move the community forward.

Any new thing in the town?

Let me say that when I became Oba, we did not have electricity in the town, when an indigene of this town named Abdul Ganiyu Folabi Salahuddeen became the Local Government Vice-Chairman in the year 2004, he caused electricity to be installed in the town.

Others joining hands to move the town forward with A.G.F Salahuddeen is Alhaji Saheed Agboola among others.

A.G.F Salahuddeen is the APC leader in the area now.

Here, in Falokun Oja, we always join any political party that we know will bring development to our town. That is why we embraced APC in this town. The party is really helping us and that is why we did everything to ensure that APC local government Chairmanship candidate succeeded. So our new Local Government Chairman Alhaji Abdulfatai Adeniyi Garba (a.k.a. Labaka)  won on the ticket of APC. The   Chairman has started well and he is ready to work. May Allah continue to guide him and all those working with him. We are hopeful of a brighter future for Falokun Oja.