Thumbs up for Alaafin over Gani Adams 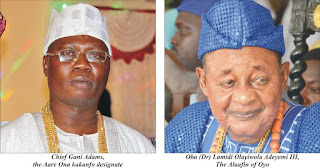 SINCE October 16, 2017 when the Alaafin of Oyo, Oba (Dr.) Lamidi Olayiwola Adeyemi III proclaimed Chief Gani Adams as the Generalisimo (Aare Ona Kakanfo of Yorubaland, congratulatory messages and commendations have been pouring in for Iku Baba Yeye over the choice of the 15th Aare Ona Kakanfo from eminent traditional rulers across Yorubaland and other personalities in the society.

It will be recalled that Alaafin proclaimed Chief Gani Adams as the new Aare Ona Kakanfo shortly after the conclusion of the sixth edition of Oranyan festival held at the Aganju Palace Square of Afin Oyo.

Few days after Oba Adeyemi had declared the National Coordinator of Oodua Peoples Congress (OPC), Chief Gani Adams as the Generalismo of Yorubaland, Obas including the Ooni of Ife, the Owa Obokun of Ijesaland, the Alake of Egbaland, the, Oba of Badagry, De-Wheno-Aholu Menu-Toyi of Badagry among other prominent traditional rulers, inspiring comments over the choice of Gani Adams have been coming in for Iku Baba Yeye.

The position of Aare Ona Kakanfo of Yorubaland was held by the late MKO Abiola, who died in the detention camp of the late military dictator, General Sani Abacha in 1998 for refusing to trade his presidential mandate for freedom.

Chief Gani Adams, in what could be regarded as his acceptance of the  title, said he was honoured to be chosen for such an exalted position in Yorubaland. Chief Adams emerged out of the five aspirants that the monarch considered for the position, it was reliably gathered.

Reacting to the appointment, the founder of the OPC, Dr. Fredrick Fasheun  simly congratulated Chief Gani Adams. Dr. Fasheun said the Alaafin had the right to bestow the title on anyone. He said, “it is an Oyo title. The Alaafin has the right to give anybody. The Alaafin gives anybody, wether young or old, altruistric or otherwise. I congratulate Adams and I hope he will behave true to his title.

In his comment, another Yoruba elder stateman, Senator Femi Okuronmu, however, said Gani Adams was too young for the title. Okuronmu, who represented the Ogun Central Senatorial District between 1999 and 2003 in the Senate, said although Adams had done a lot for the Yoruba nation, he still had a long way to go.

The former lawmaker said most men who were bestowed with the title hardly ended well. He however, wished Adams the best. Okurounmu said “my honest opinion is that as a young man, that title is not befitting for him. I think that title is more befitting for an  older person, an older person who has accomplished more for Yorubaland.

“As much as I like the young man and his activities for Yorubaland, I think he is a bit too ambitious and too much in a hurry. I would have wished the title would have been given to someone with a history of achievements and accomplishment for Yorubaland.

“That title doesn't have a very good history.  In Yorubaland, people with that title have not always ended very well and I think that is perhaps why people are always running away from it.

Chief Adebanjo dismissed claims that people with the title do not always end well, adding that it was time for the Yoruba nation to be united and support Adams.

He said “he should bring the Yoruba nation together. The  people of Yorubaland need to be united now more than ever.  People who are not on our level of civilisation should not be allowed to dominate us”.

Historians said in the days of yore, the Aare Ona Kakanfo was the highest war title bestowed on someone considered to be brave and loyal to the Alaafin and the Yoruba cause. According to him, the title symbolises the power of the Oyo Empire, adding that the holder of the title must not be defeated in war.  It is a taboo for an Aare Ona Kakanfo to return from battle defeated. He either wins the battle or dies in the battle field.

But know when wars are no longer there to be fought, the title becomes ceremonial.

The last 14th holder of the title, the late Chief M.K.O. Abiola, and the holder before him, the late Chief Samuel Ladoke Akintola, were both politicians. They both died in circumstances that could be likened to the title they held.

According to the respected Yoruba historian, the late Reverend Samuel Johnson, in one of his works, the Aare Ona Kakanfo at inauguration must completely have his head shaved and must undergo some streneous rituals to test his agility and ability to withstand fortune.